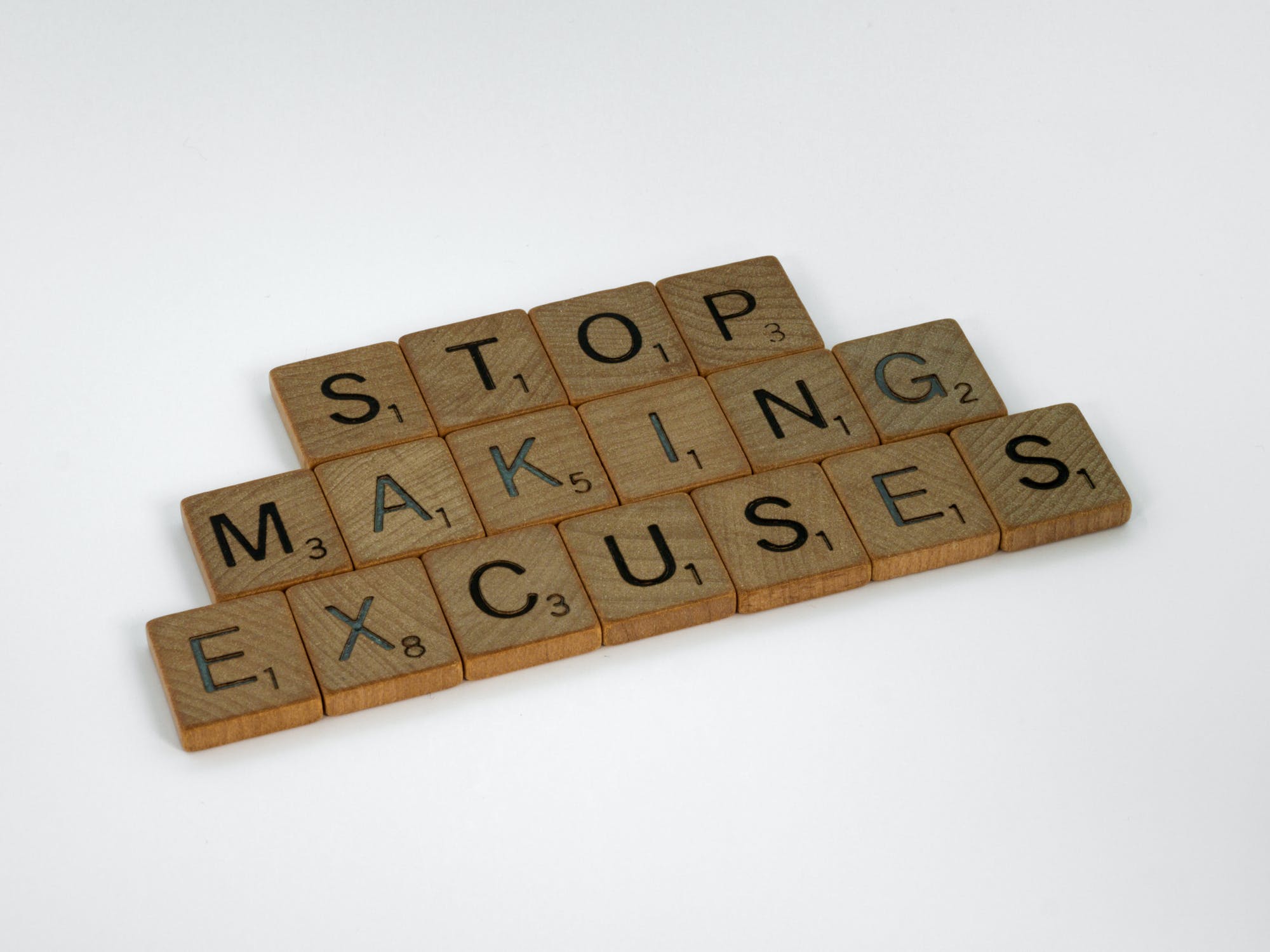 Boy, do we humans ever have an arsenal of excuses.

We use them to explain, justify and/or self-impose a limitation as to why we can’t do something.

Want to know how you can tell when you’re making an excuse?

Do the money test.

Ask yourself this: if we gave you one, two, or five million dollars (whatever number works for you), would you be able to NOT text when driving, rage less, be nice to your spawn at witching hour, lose those last five pounds, find a new job, quit sugar, be bolder at work, or be a morning person?

Of course, you COULD.

Well that’s another question. You see, all of a sudden given the right incentive (in this case, money), you could change ANYTHING in your life.

That begets the next question: How come you and your dream life aren’t worth it?

Wanna hear some greatest hits of excuses from our clients, coaches, and children, oh my:

On finding a new job:

I’ve been out of the market too long.
I wouldn’t know where to start.
I don’t have any professional clothes to wear to an interview.

On going on the dating sites:

Everyone is a liar.
I just want to do it the way I used to, in person!

I had such a hard week at work, I deserve a cookie.
Diets don’t work for me. Never have.
Thyroid…Metabolism…Big bones.
Muscles just weigh more.

On getting that colonoscopy/mammogram/teeth cleaning:

During a pandemic?! (p.s. you didn’t do it before the pandemic either)
I feel fine!
I don’t know how my insurance works.

On posting on social media:

I’m too old for this.
My life just isn’t that interesting.
I’m still coming up with ideas…

So I’m just going to be that asshole who talks about how they “get enough sleep”? No, thank you.
If I don’t worry about the worst case scenario, how will I be prepared when it happens?

Everyone has their own favorite brand of excuse. In truth, excuses are brilliant.

They keep us from having to do something we don’t want to do and let us explain why we can’t {fill in the blank}. Heck, we have permanent no-fault insurance and, best of all, it’s the excuses fault, not ours.

Your happiness, self-esteem, and pride, however, pay the premium.

P.S. Inner.U LIFE is a 12 session online course that gives you the tools to hack into your own life, hone your dreams, and have every last thing you want in the areas that matter most to you: CAREER, MONEY, LOVE, TIME, FAMILY, and HEALTH. Do this life thing better from wherever, whenever.

Marnie Nir is Senior Vice President & Chief Content Officer and Expert Life Coach with Handel Group. She finally returned from Florida (a period in her life she likes to refer to as “witness protection”) to her home state of New York, but has shuffled around from New York to California and back again throughout her life. Marnie’s professional and personal life have come full-circle as well. A student of Slavic Language and Literature at UCLA, Marnie graduated with a BA and an understanding of Russian Literature as “purification through suffering”. Years later, after several jobs in publicity and production, most notably for the Teenage Mutant Ninja Turtle live tour (can’t make this stuff up), she began to see that, at least in her own life, suffering was not mandatory.  After marrying and giving birth to her first child, Marnie started coaching with her sister, Lauren Zander, creating the dream of who she wanted to be as not-her-mother. However, her work with Lauren took everything in her life to a much deeper level. More than a decade later, she is now an empty nester of two, co-author with Lauren Zander of Maybe It’s You, SVP of Chief Content Officer, and an Expert Life Coach in The Handel Method. She has also continued her creative work, namely as co-creator of the animated series Mother Up!, which aired 13 episodes on Hulu and starred Eva Longoria, serving as an expert at Campowerment, blogging for the Huffington Post, as well as writing her own blog (The Sour MILF).