Is being brave moving on from everything with a smile, taking all the risks or jumping from town to town? Is it to love? Is it to fight in the front line of battle?

Being brave is most definitely all these things and more. Although, I do feel like there is a perspective on being brave that can have some of us, including myself twisted up a bit.

Being brave is allowing ourselves time to break down in order to regrow, rather than jump to the next scenery.

Being brave is being wherever we are in this moment.

Being brave is trying not to become our thoughts rather observe them. Take the time to learn this and to practice this.

Being brave enough to accept the times we do get caught up.

Being brave is being me and it’s being you.

It is also allowing yourself to lose some parts of your identity that was held onto because maybe that’s not really us. Maybe that was brave’s best friend showing up in place of bravery as a form of protection.

With that, being brave is accepting how we reacted and handled things from the past and maybe the time just wasn’t right for us to be able to process some of the big things, and the small things.

Being brave is showing up for ourselves when we may not want to and honoring where we are.

Sometimes we tend to feel like we have something to prove in order to be brave.

But, maybe bravery is sitting back when our hearts are asking us too.

Saying no, and saying yes.

Whatever it means for you to be brave, I see you. I know you are brave. I see we are brave.

Being brave enough to be kind, not only to the world but to ourselves.

Being brave enough to know it’s okay we have a hard time showing compassion.

Compassion within the compassion.

A lot of definitions of being brave say not being scared. To me, being brave is allowing yourself to feel however you need in order to move forward. We can be scared and do, at the same time.

Mostly, you. Whoever you are reading this. I see you. I see your strength, I see your bravery. Your light is shining whether you feel it or not. Some of your bravest moments may not appear as brave within the conditions of the perspective but damn, you brave.

Create your own definition without the connotation of the world’s definition.

Know that you don’t have anything to prove to be defined as brave. 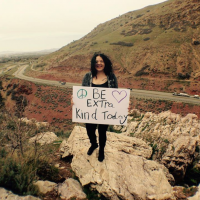 Em Garcia is a Hip Hop Artist and Writer. She is a growth seeker and believes kindness can change the world. She believes in everything and everyone. Honesty within yourself and others is the first step to an authentic life is the motto she lives by. You can find her on Facebook, Twitter and YouTube.