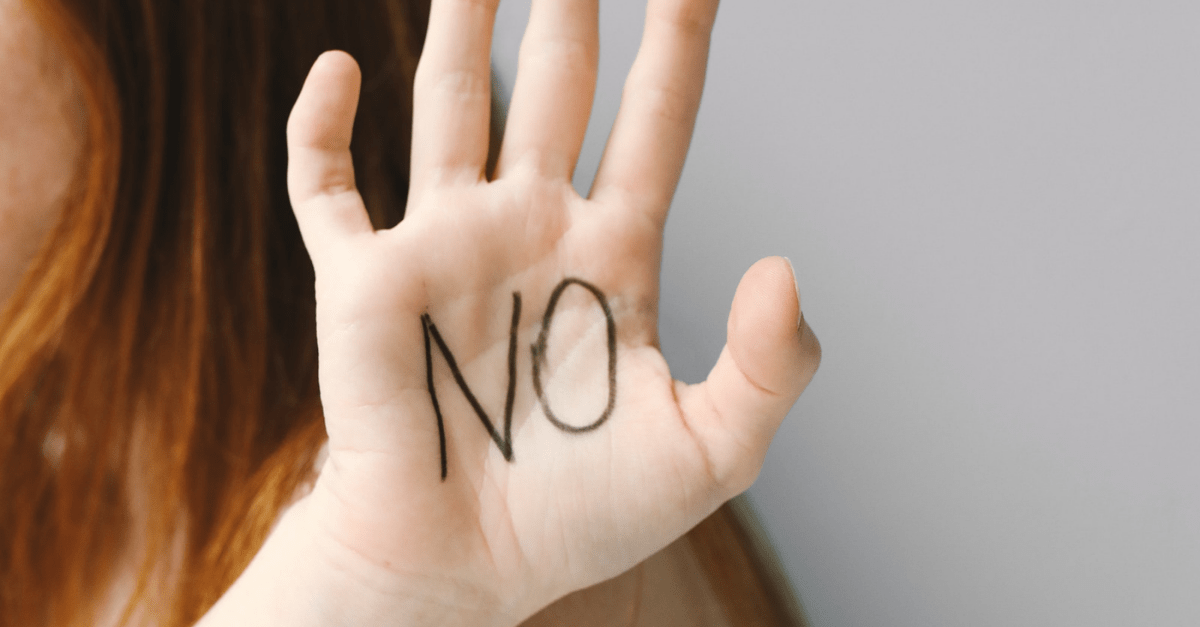 For a lot of people, the simple act of saying no is actually anything but simple. Disagreeing or opting out of something would seem like a low-effort act, especially since there are only three basic answers to a request, yes, no or maybe. However, when it comes to actually saying no in real life applications, people tend to struggle.

There are various reasons why saying no can be easier said than done. The most common issue is that we don’t want to seem confrontational or like we lack compassion.

Most of us like to come off as generally agreeable and friendly and feel as if turning someone else down is some sort of personal insult. Another common reason we don’t say no often enough is the dreaded fear of missing out.

We feel that if we don’t take part in or attend something, everyone else will benefit from the experience and we’ll only get to hear about it afterwards. The list of factors that make saying no more difficult than it should be goes on and on.

One fact that’s often neglected is that the ability to say no can significantly benefit our happiness and satisfaction in a variety of situations. Likewise, feeling a compulsive need to agree to everything leaves us susceptible for all kinds of problems. For this reason, we’re going to discuss some key points that will hopefully explain why you don’t owe anyone an explanation for saying no.

One of the unfortunate characteristics of a lot of people is that they will take from you as much as you will allow them to have and then some. These types of people usually approach most situations based on what will benefit them without considering the needs and feelings of others.

Some individuals behave this way knowingly, while others simply lack the ability to realize when they’re taking advantage of someone. As you navigate your daily life, you’ll encounter more than a few of them.

Without the ability to stand your ground and say no to those who are constantly asking for favors or requesting your time and energy, you’ll quickly find yourself at the mercy of everyone else. In these situations, we’re often at a disadvantage from the start given our perceived responsibility to help other people compared to the self-interested nature of the person we’re interacting with.

A funny thing happens when you allow yourself to stand your ground and say no to these types of people, they quickly label you too difficult of a target and move on to the next person.

No To One Thing, Yes To Another

When you find yourself wracking your brain to come up with an explanation as to why you’re telling somebody no, ask yourself this; are you going to be dedicating their time and energy to the request or your own? Although the question is rhetorical, it’s an important one to consider.

When it comes down to it, time is the most valuable asset you’ll ever own. It can’t be bought, stored or created out of thin air. Therefore, it’s important that you treat your time with the utmost respect.

Remember that you only have a finite amount of time. For everything that you say yes to, you’re simultaneously eliminating the time required to do something else. Even if you aren’t consciously deciding to not do something in favor of agreeing to what someone else asks you to do, you’re still handing them a piece of your most prized possession, your time.

What you need to realize is that when you say no, often times you’re saying yes to something else. The free time you allow yourself that would’ve been expended by saying yes to another person can allow you to nurture your own life.

How much more satisfying would it be to spend this time with your friends or family, catch up on work around the house or even take a well-deserved nap?

Remember that every time you say no to something, there’s almost always a yes on the flip side of the equation.

Other’s Opinions Are Not Your Responsibility

One of the most liberating things you can realize is that not only are other peoples’ opinion of you mostly out of your control, you’re also not responsible for ensuring that everyone loves you.

Too many of us expend entirely too much mental and emotional energy worrying about what other people think about us. It’s really difficult to say no when you’re overly concerned with pleasing everyone.

Sure, we all realize that we should interact with others respectfully and as harmoniously as possible. In saying that you shouldn’t worry about the opinions of others, this doesn’t mean that acting like a jerk is fine because their perception is out of your hands anyway. However, no matter how careful you are to treat others the right way, there will always be those who form negative opinions of you.

As long as you’re interacting with other people in a respectful and civil manner, it’s not your job to cater to their every want and need. This means that if saying no to someone causes them to form a negative opinion of you, the problem lies with them.

To Care For Others, You Must Care For Yourself First

We all have people in our lives that depend on us. Family, kids, friends and coworkers all count on us to fulfill certain responsibilities. Taking care of other people is a foundational principle of social interaction that’s necessary to keep society going.

An important thing to realize is that you can’t give what you don’t have. As we previously discussed, you can’t create time and energy out of thin air. In order to care for the people who depend on you, caring for yourself first is a prerequisite. You’re the first step, the source of everything you do for anyone else. Taking care of yourself is not automatically a selfish act.

This means that saying no to things that consume too much of your time and energy is often necessary to selflessly care for others. The more of yourself that you give to things that don’t benefit your life and the lives of those who depend on you, the less you’re going to be able to give where it matters.

Upholding What You Know To Be Right

Finally, being able to say no is absolutely necessary if you’re going to stand up for your morals and the things you believe in. Whatever your personal values are, there will be times when you’re asked to take part in things that go against what you know to be right. Lacking the ability to put your foot down in these situations leads to sacrificing your sense of morality.

When saying no to things you know to be wrong, it’s completely up to you if you decide to explain where your morals lie and why you feel it’s against your beliefs to partake. Remember though that you don’t even owe other people that much explanation.

If you allow yourself to be pulled in every direction, especially in situations that go against your sense of right and wrong, you risk losing your sense of self in the process.

George J. Ziogas is an HR Consultant with 15+ years of experience across a number of industries with a specialization in Occupational Health and Safety (OHS). He is a qualified vocational instructor/teacher and personal trainer. George is also a blogger and top writer in numerous categories/tags on Medium. He speaks several languages (English, Greek, Macedonian), and enjoys working out/keeping fit, music, reading, and traveling. He is married and lives in the beautiful Southern Highlands of New South Wales.