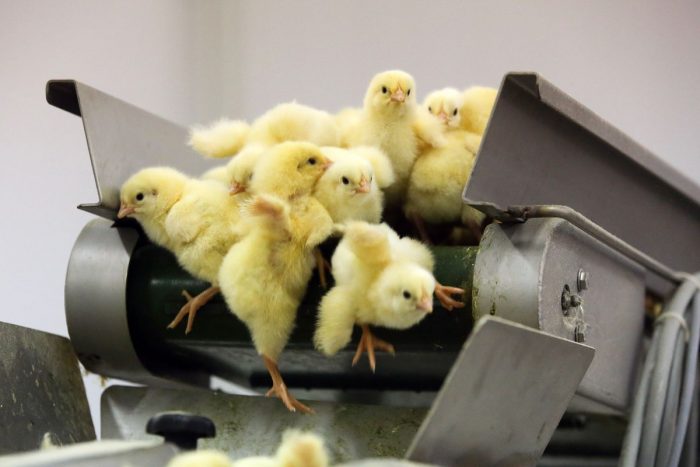 People like to eat eggs, but most of them don’t know about the cruel conditions in which the eggs they eat are produced.

Do you? If not, then let me tell you.

Nearly all eggs being bought and sold in the market come from the egg industry — an industry that sees chickens merely as egg production machines, and exploits tens of billions of them each year for one and only purpose: to sell their eggs and make profit. And the way it achieves that is… horrifying.

Here’s what the process of industrial egg production looks like:

When they are born, male and female chicks are separated. Right afterwards, nearly all male chicks are killed, usually by being ground alive or thrown into plastic bags where they’re left to suffocate. Why? Because the egg industry considers male chicks “worthless”, since they don’t lay eggs and hence can’t make the industry any profit.

But female chicks have it much worse: once they grow up, they are usually placed in huge barns where they have to live with hundreds or even a thousand of other chickens, confined in small cages where they step and lie on excrement. Living in such filthy conditions, many of them get sick and die. To minimize disease and deaths, the egg industry regularly pumps hens with hormones and antibiotics.

For the rest of their lives, hens have their eggs constantly stolen, which makes them produce more without end. In their natural state, they only lay eggs until they have a full nest, but by removing their eggs this natural process is interrupted, and they feel the instinctual urge to lay more of them in order to fill their nest. This is not only exhausting for them, but also damaging to their health, since every single egg requires tremendous calcium loss from a hen.

But things get even uglier: because of the continuous pressure their laying organs have to endure, some hens even die in the process. Those who don’t, are day in, day out exploited and abused for their eggs. But their life doesn’t last for long: once their production wanes, they all end up in the slaughterhouse where they have their throats slit. This usually happens when they are just a few months old, while in natural conditions chickens live for about 8 years.

This is the truth about the egg industry — a truth most people don’t know about, because it has been intentionally hidden from us. If you didn’t know, now you do, and this gives you the power to make better-informed decisions — that is, decisions that can help put an end to the egg industry, such us saying no to the consumption of its products and raising awareness about the unbelievable cruelty caused by it.