Growth is an imperative component of life, without it, there’ll be no progression and life will be on the still. But, life in itself is a development. Where there is stagnation or incomplete expression of human potential life provides series of interventions to stimulate growth; in any of these interventions there is a lesson to learn or an inspiration to take receipt of.

One such indispensable interventions — mistake — ceaselessly manifests itself in the life of every human. Mistakes are sweet bitter happenings that afford humans the opportunity to learn much from and lead to progressive growth. Unfortunately, the fuss the mass believe is that mistake is the same as failure, NO! There is a striking white and black difference between the two, and I will briefly bridge the gap to efface the fuss.

A mistake is like a small error. It is an incorrect, unwise, or unfortunate act or decision. A mistake can be caused by bad judgment, a lack of information, or a lack of attention to detail. While a mistake can lead to failure they do not always have to end in failure. We make numerous mistakes every day without serious consequence.

Conversely, failure is more of a feeling as a result of many mistakes. Failure is more of an emotional state — a bad feeling of a self as a result of series of mistakes made. YES! It is pretty simple, actually. I will augment it with a famous quote from Jim Rhon (speaker and author): “Failure is not a single, cataclysmic event. You don’t fail overnight. Instead, failure is a few errors in judgment, repeated every day.” Jim was right, and that leads me to think that failure and mistakes are not the same thing. Failure is by Jim’s thinking, something that occurs over time. Many are the mistakes we make and they are not maledictions, but interventions to help us grow. Mistakes, the unavoidable realities and also the best free schools, come as remediations to preempt repetition of errors and make our knowledge about something even finer. They come as lighters to unblind us on certain choices, reveal where our passion is and it is not, bring out problems in a relationship, humble us where we were arrogant, and so much more.

I am going to share a story about a mistake I made, and that taught me a better alternative— the considerate path — I had not considered earlier.

It is a tale lacking a fairy so fairly realistic to tell. It generally would not be prudent to fail to honor an invitation —just to leisurely stay at home — to a wedding of the daughter of your easygoing landlady. The matrimonial incidents lacked not a single trait of the true Ghanaian way — almost the usual is: a traditional ceremony first, and a church wedding the next day. But this mistake I made which to many would be very normal in a sense took place in the traditional wedding setting. The culturally incensed rite between Evelyn and Curtis on the late morning of one Friday in Kumasi (the second largest city in Ghana) actually saw me in the midst of curiosity and beauty.

It was a moment I truly blessed my knowledge with whole new scenes of rich Ashanti culture hidden in the bowels of a traditional wedding. Regrettably, I have to skip the long narrative of what seemed to be a dashing display to land you right on the shores of the part where I so much want to share with you.

The graceful and glorious rite had just begun, and the guests were entering the event hall in singles, doubles and even more to find spaces for themselves, and witness the matter that summoned them in the first place. I had already taken a cursory look at the hall; it was quite small, and by estimation might not be able to accommodate more than sixty guests. Consequently, I quickly decided to create a niche somewhere in it for myself where I could clearly have unobstructed view of the couple. Because the chairs at hall were scanty, I planned to go to where the after party would be and fetch four chairs for myself and some other three tenants I went along with. I saw one or two ladies doing it and I swiftly joined in. I just did not know how to approach the carriage of the chairs, but I looked at how one lady did hers and wanted to follow in the exact manner. I rashly put three chairs on one to make four and decided to lift them at a go with little carefulness, but then too, I had become the object of concentration for the eyes of the multiple guests standing by opting to lift some chairs too. I lifted the chairs and the next moment was a loud thud — the chairs had fallen; shyness had my gaze fixed to the ground and my mind told me the people are looking at me. Few questions bought by the expensive embarrassment easily came in mind…. “how do I redeem myself? How do I lift the chairs in a better way to avoid another shame? The feeling was as awful as bee sting. Finally, my eyes were up and randomly picked some faces from the crowd — you could see surprises and faint, sneering smiles hanging on their countenances. My head has never weighed that heavier and it felt almost like I was carrying a bag of cow dung escorted by all the houseflies in Africa.

One question which proved stubborn to leave my mind when the chairs dropped was, “how could I carry them in a better way to prove my doubters standing by wrong?” It is like that, when we make mistakes, we begin to think more rationally to dissolve our regrets and placate our mental can dos any time another opportunity pulls out its head. When I saw the people staring at me still as though I had “wanted” overtly written on my forehead,” I just thought of being more considerate in my next approach; such is the prime school a mistake can purvey to teach us to make an instant transition from our bad to good, and from better to best. Not long, my mindset had transitioned from carelessness to considerateness and, consequently, I lifted the chairs in a manner more accurate than before — I shamed the shame and bought my mind some relief. You might have experientially been in a similar terrible incident for which you did not know what to do, or how to do it, and you seemed like a fish in a dry sand. Such situations in life just do not come, but come to uniquely school us to learn lessons for the remaining unknown days we have left on earth. Mistakes are inevitable realities and are like sleeps; we need them to go into a state of necessary inactiveness and later awake to a new sense of consciousness feeling more refreshed, finer and revitalized more than ever.

The necessity of mistake

Often times, when we do things for the first time we do so with much uncertainty; contemplating on whether the outcome will be successful or not. However, there comes a time in life later we have made mistakes and through that the logs on our eyes are removed, success becomes clearer in the doorway. Life understands our worth and knows what we rightly deserve. One key thing to note is, we cannot consciously be ready for anything at any time, so there is this natural phenomenon —mistake— in place to essentially prompt us of certain missing required values we must have before we could advance. Thus mistake, as valuable as it can be, comes to naturally repeat a process we have been through but failed in order to aid us unlearn the wrongs, relearn the rights, and learn new stuffs until we are better placed over mediocrity, and not so far from the depths of excellence. You could clearly tell from my story that I lacked precision in my earlier approach to carry those chairs because I felt like a cat that got the cream. When the mistake was made and the chairs fell, I was offered the opportunity to discard the unproductive predisposition and hook onto something productive and when I did, it took me to success — you can never make success as a human without first of all committing mistakes.

Your mistakes do not define you, but what defines you is what you become with the lessons they teach. There is a thin line between failure and success; failure is the unwillingness to accept and implement the lessons mistakes teach, but the opposite is true for success. Mistakes are gifts in disguise — the finest gifts of criticism that life can ever give you to help reshape your thoughts and reconsider your earlier decisions for a better outcome in the right time! When the famous, determined scientist Thomas Edison decided to invent a commercially-viable electric lightbulb, he failed (not viewed as failure but errors in methods) over 10,000 times. When asked by a reporter how it felt to fail so many times, he merely stated, “I have not failed 10,000 times. I have not failed once. I have succeeded in proving that those 10,000 ways will not work. When I have eliminated the ways that will not work, I will find the way that will work.” To Edison, every single mistake he made in his arduous odyssey to invent the lightbulb was a burning flame to refine his method. One key element to learn from his story is perseverance. Every strong soul or an achiever learns from his mistakes and preserves until success is born.

Be a good student and learn!

The unfortunate is the blithe most give to their mistakes and in effect remain halfwit and unprogressive. Anytime there is stagnation of life or incomplete expression of one’s potential, there is either not enough mistakes made or unwillingness to extract and implement the knowledge from the lesson mistakes offer him or her. In fact, you could argue that one of the prerequisites for success is some hurdles along the way that help you build strength, resilience and intestinal fortitude. Then when you do achieve the success you have been seeking; it will be all the more enjoyable. Be glad when you make mistakes do not fret; mistakes take you to free schools so that you can be refined into something magical you never even imagined! But the sin is your negligence and stubbornness as a student to learn from the lesson mistakes offer — if that is not skirt rounded, you would keep making same mistakes and you might surrender to failure!

Your mistakes do not define you, but what defines you is what you become with the lessons they teach. Have you learnt from your mistakes? 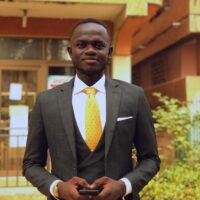 Kofi Karikari is a writer from Kumasi, Ghana. His poems, inspirational articles, and stories can be found at https://jeffamp150.wordpress.com/.