It will happen later. His best friend will ask you out instead. You’ll be kissed in the movies instead of on a beach. You’ll end up going to a different school because the one you thought you’d get into didn’t work out.

She’ll move away. Someone else will move in next door. She’ll be a little weird at first, a little more shy, but ultimately really good at riding bikes and playing dolls.

That part you always wanted will go to that other girl instead. And you’ll rock it out in the chorus like your life depended on it. Because on some level it does.

The road you were going to take will be flooded and closed. The inn where you were going to stay will be under renovations. He’ll be taller than you thought. And have a funny accent. But will be a good kisser nonetheless.

You’ll get a flat tire on the way to that crucial meeting and end up peeing your pants laughing with the gas station attendant over a copy of Us Magazine. And someone else will fill in for you because they always do.

You won’t get that dream job like you thought you would. It will go to someone else with far less creative drive and vision than you. Someone far better suited for a cubicle than you.

You’ll be put in groups with people who put your panties in a wrinkle. You’ll sit next to someone on the plane who you’d never talk to except that they won’t shut up…and you’ll end up staying in touch for years and taking family vacations together.

Five years after you graduate life won’t look anything like you would have imagined. You’ll be single when you thought you’d be married. You’ll have kids when you thought you’d be in the Peace Corps. That trip to Laos will get delayed because you’ve got to stay home and take care of your grandmother. Laos will be there. Your grandmother won’t always.

He’ll move over seas and oddly the Atlantic Ocean between you will bring you closer than you ever dreamed possible. You won’t get engaged, married, or pregnant when you thought. You’ll miss the bus/train/plane/ferry that you thought you just HAD to be on.

You’ll fall off the turnip truck. You’ll jump on a different bandwagon than you intended. You’ll get fired when you thought you ought to be getting hired.

You’ll realize you forgot the outfit you had planned to wear and that the shoes are all wrong now that you have a full-length mirror to see the whole outfit. Your shirt will be wrinkled and you’ll spill red wine on your white jeans.

Your dog will eat your five-year plan. You’ll drop your Blackberry in the toilet (at least once.) Your computer will crash and you’ll delete the first draft of your magnum opus. You’ll accidentally delete your hard drive and end up with a clean slate.

You’ll show up late to the date with the guy you were sure was going to fit into your husband suit and realize he’s less than graceful under stress and not so flexible. (Better to know now than later.)

When you thought you’d be baking pie and living behind your very own white picket fence you’ll find yourself doing something so entirely different you couldn’t have even imagined it a year before.

There will be moments when you’ll look around and not even recognize your own life…in a good way.

You’ll flunk out and end up taking five years instead of four to graduate. You’ll have your heart broken when you were sure you were with the one and then meet the other one a month later. You’ll move to a new city to start a new business with those perfect new business partners and then it will all go to shit. And you’ll move across the country again only to realize that that’s where you belonged the whole time.

You’ll drive as far away from home as possible thinking that it will make you feel free. Then you’ll get homesick and drive back four months later because you suddenly feel trapped.

You’ll imagine the open road, country music playing loud, you singing at the top of your lungs, and flirting with a new man in every town. And then you’ll invite someone to come with you on a whim and realize driving around the country by yourself was a terrible idea anyway…and that it’s way more fun when you’re traveling with someone you love.

You won’t do it at the right time.

It’s not going to turn out the way you thought it would.

IT WILL BE BETTER. 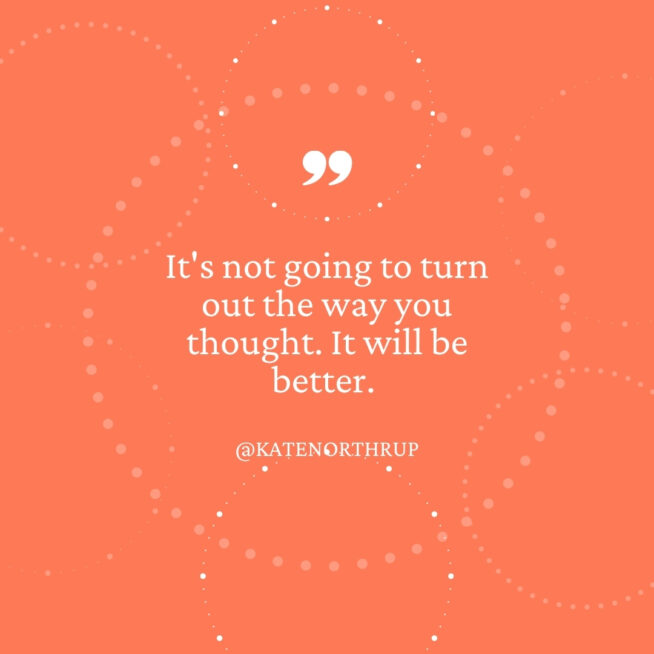 Want a beautifully designed reminder that it’s not going to turn out the way you thought it would, it will be better in your home or office? Grab your poster of this blog here!

Kate Northrup is an entrepreneur, bestselling author, and mother who supports ambitious, motivated and successful women to light up the world without burning themselves out in the process. Committed to empowering women entrepreneurs to create their most successful businesses while navigating motherhood, Kate is the founder and CEO of Origin Collective, a monthly membership site where women all over the world gather to achieve more while doing less. Her first book, Money: A Love Story, has been published in 5 languages. Kate’s work has been featured by The Today Show, Yahoo! Finance, Women’s Health, Glamour, and The Huffington Post, and she’s spoken to audiences of thousands with Hay House, Wanderlust, USANA Health Sciences, and more. Kate lives with her husband and business partner, Mike, and their daughter Penelope in Maine. Find out more and receive your free copy of the 5 Simple and effective ways to get the results you want in your business at katenorthrup.com.