With the recent Tokyo Olympics, I feel especially moved to share recent meaningful stories of how everyday heroes in the running community have impacted and inspired my life.

Let me introduce myself. My name is Claudine Nicholas. I’m a 53 year-old marathon runner. I’m not a handicapped athlete, but I am a challenged athlete. For 30 years, I’ve had lupus SLE, a chronic autoimmune disease with no cure. I also have fibromyalgia and six damaged discs in my neck and back. Despite the odds and the outlook of my doctors, I’m working to achieve some incredible running goals and to make lupus history in the next year or two. I’m on schedule to complete half marathons and full marathons in all 50 states during the summer of 2022. I was going to earn the Abbott World Marathon Majors 6 Star medal in 2020 until the pandemic hit and changed the timeline. Now I will earn the coveted 6 Star World Marathon Majors medal in either 2022 or 2023, depending on when the Tokyo marathon organizers allow international runners back into their race.

Along this running journey, I’ve been helped and encouraged by so many other runners with far more challenges than myself.

They have imparted strength and hope without ever knowing their impact. Just this past December, I was running three full marathons in eight days. It was the first time I had ever attempted this. After the second marathon, I had the Mt. Everest of blisters on my left heal. It was so bad that I couldn’t even put on a shoe, so I showed up for the third marathon in slippers. 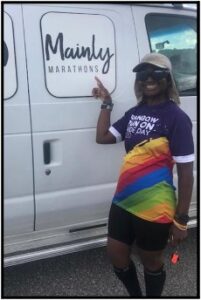 At the beginning of day two of the Texas Double, I met Evelyn Smith, a 60-year-old Marathon Maniac from the Chicago area. She began telling me her story of how she got into running. She had lost over 100 pounds without weight loss surgery in less than two years and had gone on to complete over 400 marathons in about 10 year’s time, all as a single mother. Evelyn had put herself through school to earn a Master’s degree, and in 2020, she completed 20 marathons in 20 days. She was unbelievably kind to stay with me the entire race, and her story helped keep my mind off of the pain of multiple blisters on both feet. Evelyn and I finished the Texas Double together, and I owe her of debt of gratitude for helping me though that event in slippers. It was one of the hardest challenges to date, and I ran Boston 2018, with two cracked ribs in that infamous bad weather. 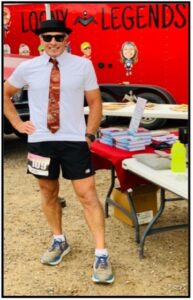 Then in June of this year during the Mainly Marathon New England series, a male runner came up behind me and started a chat. As runners do, we began talking about the races we were going to run this year. I said my goal was to complete 13 full marathons and 13 half marathons this year. Then he told me that he had already run 47 marathons this year and planned to run over 100 marathons. I nearly gave myself whiplash when he said 47 marathons! “What??? Wow…just WOW!!!!”

He proceeded to tell me how he had been paralyzed as a child from an accident and how he had spent a lengthy time in physical therapy after major back surgery to recover. It turns out this gentleman’s name is Greg James, who at age 64, is near the top of the Marathon Maniac Leaderboard. Greg also ran 20 marathons in 20 days in 2020 and has also completed nearly 400 marathons. During this one short conversation with him, my vision of what was possible changed dramatically, and my new goal for 2021 became to complete 30 full marathons and 30 half marathons in one year.

I wish everyone were as blessed as I to be exposed to these giants of making huge dreams come true. If only people learned not to settle and keep pushing forward. Their courage is contagious! These people truly lead by example and show the way through hardship.

Most recently in July of 2021, I decided to take on six half marathons and three full marathons in eight states in 14 days. Of course, I had upped my game because of Greg’s inspiration. After the first half marathon and first full marathon, I again had a huge problem with blisters. You see, Nike quit making my beloved Nike Zoom Vomero running shoes, which were super cushioned and helped me not to feel the herniated discs in my back. I had gone through a series of other running shoes with no luck. The other running shoes I tried either gave me blisters or dug into my achilles tendon. So after the second race, I found myself wondering if I could complete my goal or if I’d have to drop out. 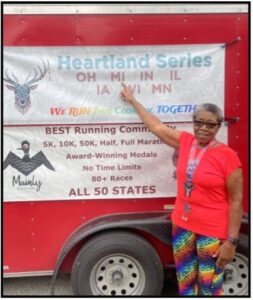 Then I remembered Rosa Head, a 75-year-old woman from Atlanta that I had seen during some of the Mainly Marathon races. She had just completed her 50th half marathon state in Indiana on July 12th during the Mainly Marathons’ Heartland series and did it with the use of a cane. I though how brave of Rosa, how daring of her to show up among other younger, faster runners and take on the 50 states half challenge with a cane! I thought to myself, “If Rosa has the guts to show up and accomplish her goals with a cane, I can show up and accomplish my goals with blisters!” So every night I would ice my feet, and every day, to my surprise, I would make it through another race. Having never officially met Rosa, her example inspired me to keep going.

This past Saturday at the Jack & Jill full marathon in Washington, I completed my goal of six half marathon and three full marathons within 14 days, and I had my fastest finish time in eight  years at the Jack & Jill marathon. July was a historic month, having covered the most mileage ever in one month, 157.2 race miles, and having earned nine medals in one month. (See July medals below.) I have been incredibly inspired and deeply impacted by these amazing leaders who happen to be runners. I must also give credit for the extra zip in my step to the enormous bumble bee that followed me and flew around my head from around mile 18 to mile 22 at the Jack & Jill marathon. I think he must have been attracted to my neon yellow Marathon Maniac jacket, which was tied around my waist…lol.

After many setbacks, I finally feel like I’m almost back to where I was speed-wise in early 2012. In October 2012, I was in a serious hit and run car accident on the highway and suffered neck, back and brain injuries. I took over a year off from running after that. Then I took over a year off from running when my mom had a heart attack and was very ill for over a year. My father and I averaged four hours of sleep a night while caring for my mom, and it must be said that nothing puts on weight faster than no sleep. After my mom passed in 2019, I found myself 30 pounds heavier and eager to get back into running. Then in September 2019, during my first marathon after my mom passed, a biker on a Harley came up behind me during the Sandia Crest marathon, and when I moved to get out of his way, my right ankle went off of a three-inch curb. I ruptured all the ligaments in my right ankle and suffered a stress fracture and MCL tear in my left knee when I fell on it. Then after physical therapy on my ankle, 2020 hit us all with a surprise…

I’ve worked long and hard at recovery, and these are the some of the great champions that have inspired me to keep going. Evelyn, Greg, and Rosa could have all felt sorry for themselves and quit, but they didn’t. They all set a goal, a course, and went after it with enthusiasm and daring. These people are all champions in my book, and I will carry a bit of each one of them with me going forward. It just goes to show that you never know who’s watching you and who you may be influencing, so you always have to do your best.

I hope someday I will inspire others with lupus to do more and dare more because of my journey. 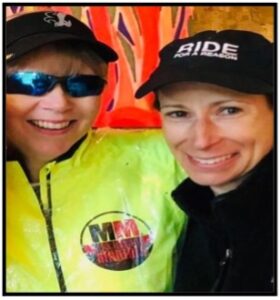 No sport has taught me more than running. Being a part of the running community has been one of the greatest gifts of all for what you learn and who you become as a member. It was dear friend, and Boston marathoner, Diane Marbut, who first invited me to participate in a race. She is a scoliosis survivor and had learned to overcome her condition and achieve excellence in running, which helped me to see running as a possibility for me and to dream BIG. Time and time again, you hear stories about overcoming the odds. You come to understand that with every race there is a lesson, a blessing, and wise words shared by runners that help you to grow into the person you were meant to be. Bart Yasso, the “Mayor of Running” and regular contributor to Running World magazine says that, “Running is the ultimate faith healer, restoring belief not only in oneself, but life’s possibilities.”

My initial “leap” into the running world back in 2010 continues to change my life to this day. Eric Metaxas says, “True faith is not a leap in the dark; it’s a leap into the light.” I happen to agree. I believe those steps forward in faith shine a light on our gifts as well as our purpose. Runners all have their reasons why they run. We’re known for living for a purpose beyond ourselves and for giving back to charity. Just as my running goals have grown, my aspirations have also grown as to what I believe can be accomplished in giving back to charities. To date, I’ve raised just shy of $40,000 as a charity runner. Nearly $5,000 of my charity fundraising has been toward lupus charities. I’ve raised money for children with cancer, children with learning disabilities, no kill animal shelters, and human and animal disaster relief. It’s always been important for me to give back, and now I have an ongoing vehicle for supporting charities. 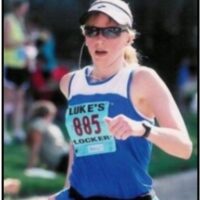 To date, I’ve completed 88 half marathons and 30 full marathons in about eight year’s time. By the end of this year, I will have run 100 half marathons, but this is really just the beginning of what I believe is possible. In 2020, my running story was featured online by Abbott World Marathon Majors in their “Spotlight on Health” segment. This fall, I will  run the London marathon, the Chicago marathon, the Marine Corps marathon, the New York City marathon and the BMW Dallas marathon, to name a few. To continue to follow my running journey, please visit www.runnindownadream.org.

To all of the runners who have been a part of my journey, my deepest thanks to you for your inspiration and for leading the way! 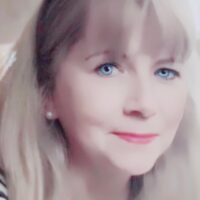 Claudine Nicholas is a Dr. Sears Wellness Institute Certified Health Coach (C.H.C.) , Member of the National Association of Nutrition Professionals (NANP), Spokesperson for the Lupus Foundation, Published Author, Marathoner, and Multiple Recipient of the US Track & Field Association’s Phidippides Award for Outstanding Performance in Long Distance Running. To date, Claudine has earned upwards of 200 running medals in her short running career. Claudine has worked in the health industry for over 20 years and loves to empower others to become healthier in the most natural way, from the farm, not the Pharmacy. Claudine believes we all need advocates for our well being and that we all have within us the power to transform a life by exemplifying and teaching fundamental healthy living rules. In her free time, she loves to paint, draw, and cook and has a passion for sharing tips for healthy meal prep with others.