12 Apr How to Train to be an Elite Netball Player

Posted at 10:29h in Performance Hub by Exercise Right

Sprint, jump, land, pivot – the basic fundamentals that make up netball. It is an interval game that requires players to have explosive acceleration speed, the ability to decelerate and change direction fast. The game itself is demanding and players must be conditioned to perform at a high standard.

While a netball player requires a good amount of aerobic fitness, the high intensity actions associated with the sport play a greater significance on individual performance.

Published data shows a high level of aerobic conditioning is required for the sport with average heart rates reported to be between 75 – 85%of the maximum heart rate during match play. However, although performance within netball is primarily associated with aerobic endurance, the outcome of netball is dependent on anaerobic activities.

Aerobic – You may be more familiar with the term “cardio”, aerobic training is a type of cardiovascular conditioning.

The “formal” wording for aerobic means “with oxygen” – Breathing controls the amount of oxygen that can make it to the muscles to help them burn more fuel. You perform an aerobic exercise over a longer and sustained period of time (running, walking, swimming, cycling).

Anerobic – Unlike its counterpart, anaerobic focuses on high intensity, high power exercises.  It involves quick burst of energy and are performed at a maximum effort for a short time.

Anaerobic exercise is any activity that breaks down glucose for energy without using oxygen. The idea is that a lot of energy is released within a small period of time, and your oxygen demand surpasses the oxygen supply (e.g. HIIT, sprinting, calisthenics, heavy weight training). 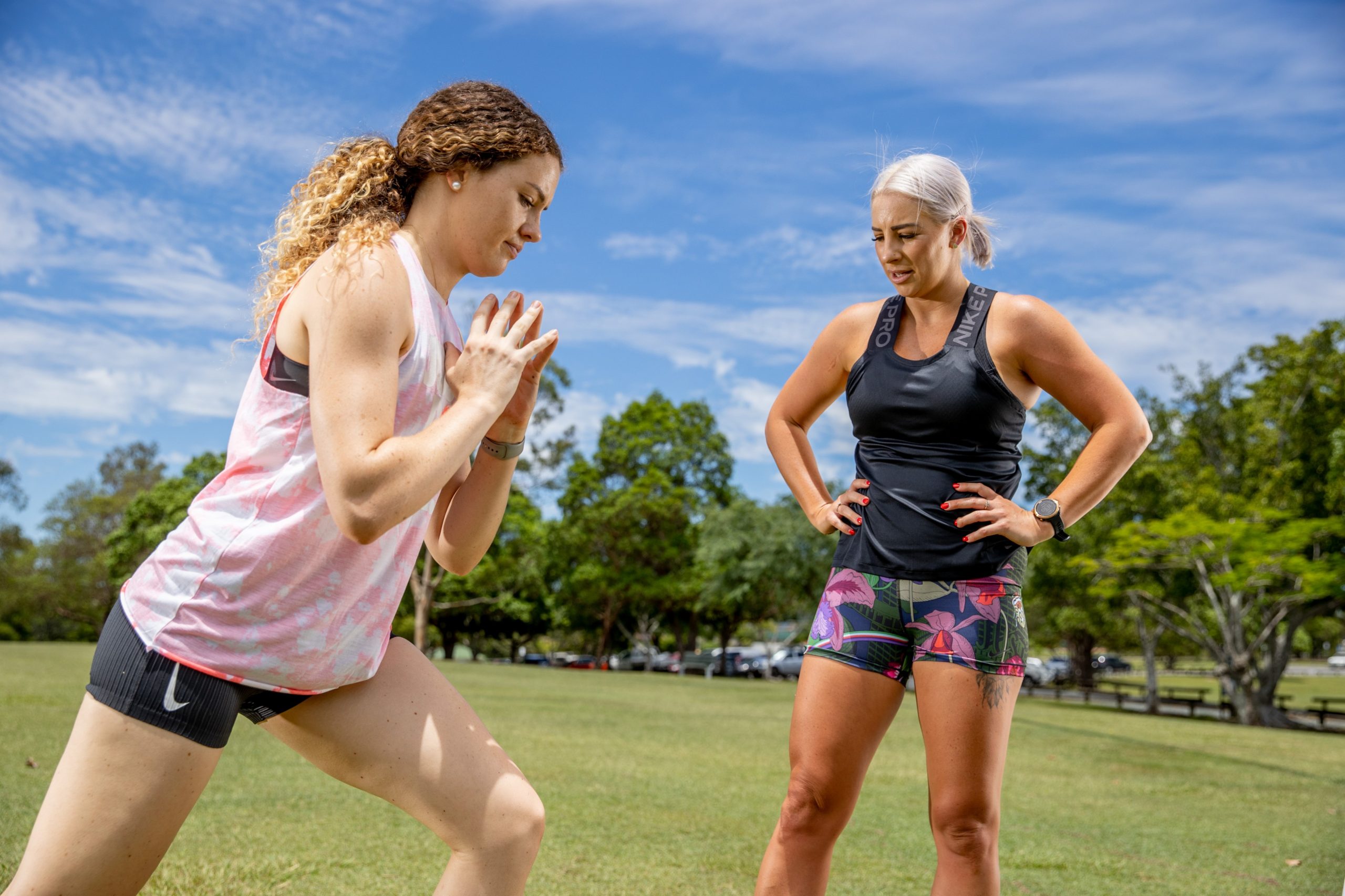 Hear from the expert:

Exercise Right spoke with Sam Joseph, Head Strength & Conditioning Coach at QUT Netball, and Sports Scientist at VALD Performance, on what an amateur netball players should consider when training to take their game to the next level.

“Netballers need to be both anaerobically and aerobically fit, but we need to remember how Netball is played – many short, sharp accelerations rather than long distance continuous running. These movements are powered by the anaerobic system, hence we should favour anaerobic conditioning”, says Sam.

Anaerobic conditioning improves the aerobic system simultaneously, so you get value for money.

Aerobic conditioning is useful, however running 5km at a slow pace is unlikely to help you in the 3rd and 4th quarter produce hard drives to the ball at high speed.

Conditioning should focus on a range of intensities between 70-100% of your max speed, with rest periods between 1-4 times as long as run (higher rest for more intense efforts. 2-5 sets of 4-12 reps up to 20 metres in length is a good place to start. If you are sprinting (90-100%), make sure you start with a low distance and amount of reps. Long distance slow running is good at the start of the season to get used to running again, but remember, it will lose effect quickly (1-4 weeks).

Does each position training differ?

The type of programming you need will ultimately depends on your current physical traits and the position you play/would like to play.

End Court players (GK/GS) are restricted to just one-third of the court and their movements will likely be short and fast, with a lot of jumping. They usually cover much less distance in a game than mid-court players. Your conditioning should focus on short (1-6 seconds) high intensity runs (80-100% of max effort) with rest periods of 1-3x how long you ran for. Incorporating jumping into this running occasionally would be useful. 2-4 sets of 4-12 reps would be a good place to start. Adding some longer distance aerobic type running at the end shouldn’t hurt.

Attacking & Defensive Mid Court (GD/WD/WA/GA) players have similar requirements to Centres, but often have a specialist skill/trait on top their ability to run (shooting/agility/defending). This means they need to be able to consistently run well across the game and perform these skills. The positions need high aerobic fitness to be able to run long distances over the course of the game but have strong anaerobic systems to tolerate the centre-pass sprints, hard drives and cuts to the ball. Conditioning for these players should focus on a higher amount of volume of anaerobic running (3-5 sets of 4-12 reps of 7-100% of max intensity. These players should also complete some aerobic conditioning on top of this to promote better recovery during a game.

Centres need to be the fittest (think highest Yo-Yo/Beep Test scores) on the team. This means they need to have little drop off in intensity from the start to the end of the game. They should be completing the greatest volume (distance) of running. Centres should be doing more anaerobic conditioning than aerobic, in a similar ratio to the attacking/defending mid court players.

WHAT SHOULD A SAMPLE PROGRAM LOOK LIKE FOR SOMEONE WHO WANTS TO BE AT THE TOP OF THEIR GAME?

You aren’t playing so you can train more to make sure you’re ready for the season. For pre-season I’d recommend starting with lowest amount of sessions until your body is coping with the training.

2-3 Strength Sessions per week: Make this a priority as the stronger you are, the better athlete you can be. Running becomes easier, you’ll jump higher and importantly be less chance of getting injury

1-2 sessions per week focusing on Speed and Anaerobic ability: This will mean long rest for your speed work and higher intensities (80-90%) and low rest (2-3x work period) for your anaerobic conditioning. This can be done before/after your skills training

1 session per week focusing on Anaerobic and Aerobic ability: You should do your anaerobic work first and then use aerobic work after this. This can be done before/after your skills training.

1 Mobility & Recovery session/week: use this to recover from the week (Sat/Sun). Foam-rolling, trigger-balling, self-message and stretching is useful here. Going for a walk/slow run also works.

Game Day +2: Strength Session + Off Feet Interval training (take on a couple of sets of intervals on a bike/rower/ski-erg/airbike to keep up your anaerobic qualities)

Game Day +3: On court training + Top up conditioning (a little bit of running anaerobic conditioning (5-15 minutes) after training will keep you fit but fresh)

An Accredited Exercise Physiologist can assist you by guiding you through an individualised, safe and evidence-based exercise program to “bulletproof” your workouts. Get in touch with your local exercise expert today by clicking here.