If you want to know how to stop procrastinating, start by zooming out and having the courage to trust your creative cycles and timing.

There’s a BIG shift we’ve been working on in my company for over a year.

It’s quite possibly the biggest change we’ve made in the last 11.5 years since I launched katenorthrup.com.

We’ve been “meaning to” launch it for a while now. It’s been 95% complete for at least six months.

And yet, it has not yet been born.

If I followed common business and personal growth mindset tropes, I’d have gone down a deep well of self-flagellation for being such a procrastinator.

But I know better.

I know that if I ask the question of how to stop procrastinating as it relates to this particular project, I’m asking the wrong question.

Sure, resistance can show up as procrastination. Sure, I have some trepidation about this shift.

But there’s a difference between procrastination and trusting the timing of creative cycles.

In our company we practice and teach something called the Upward Cycle of Success.

It’s a way to categorize projects that helps you and your team to have abundant harvests without burning out in the process.

Just like in nature, our projects need all four seasons in order to grow, be plentiful, and sustainable.

Here are the phases of the Upward Cycle of Success:

(*Shout-out to Fritz Perls who coined the term Fertile Void as part of the Gestalt psychology movement.)

The problem with the way we work in our culture is that we skip Culmination and the Fertile Void.

And we wonder why we’re so tired and burned out. We’ve skipped a full half of the seasons necessary for the growth and sustainability of anything in nature.

The planet would not work without autumn and winter and neither should we. 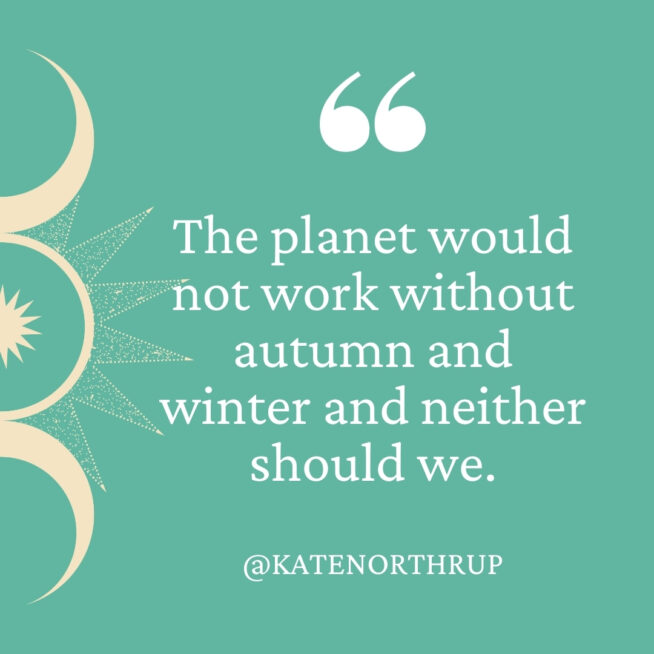 Some projects take longer in certain phases or seasons than others.

The project we’ve been working on has needed longer Fertile Void and Emergence phases than we had expected.

Having written both of my books right at the end in the final six-eight weeks before they were due, I happen to know that my creative process is one in which there’s a lot of percolation (Fertile Void and Emergence) and then a shorter Visibility phase where things become materially visible.

Having watched a time-lapse of a seed taking its sweet time rooting down before it sprouts up to be seen above the surface, I know I’m in good company.

If I got sucked into beating myself up for procrastinating, being in resistance or not being ready to launch when we originally planned, that would be A LOT of time and energy wasted that I could have been directing into rest and creativity.

Luckily, I did not get sucked into beating myself up.

I decided to trust the timing that this project had, even if it didn’t align with the timing I thought it would have.

I’ve learned from my friend Nisha Moodley that our businesses have souls of their own and, similar to how as parents we are responsible for supporting our children and keeping them safe but not in control of who they will become in the world, we are here to be in co-creation with our businesses.

This big thing we’ve been working on has taken as long as it has taken.

And I trust that, while I may not ever know all the details as to why, that it needed this timeline to become all of what it was meant to be.No matter what creative pursuit you’re working on, remember that creativity has cycles and seasons.

Our human timelines are just as flawed as we are.

When we do more allowing and less beating ourselves up for our supposed “procrastination” we become a lot more abundant with a lot less friction.

Now, I’d love to hear from you:

What are you working on right now that’s taken longer than you expected? What’s your relationship with procrastination? Was what I shared here today supportive of your ability to trust and let go? Leave a comment and let me know!

Kate Northrup is an entrepreneur, bestselling author, and mother who supports ambitious, motivated and successful women to light up the world without burning themselves out in the process. Committed to empowering women entrepreneurs to create their most successful businesses while navigating motherhood, Kate is the founder and CEO of Origin Collective, a monthly membership site where women all over the world gather to achieve more while doing less. Her first book, Money: A Love Story, has been published in 5 languages. Kate’s work has been featured by The Today Show, Yahoo! Finance, Women’s Health, Glamour, and The Huffington Post, and she’s spoken to audiences of thousands with Hay House, Wanderlust, USANA Health Sciences, and more. Kate lives with her husband and business partner, Mike, and their daughter Penelope in Maine. Find out more and receive your free copy of the 5 Simple and effective ways to get the results you want in your business at katenorthrup.com.