27 Jul How a Professional Skateboarder Trains

Posted at 11:17h in Performance Hub by Exercise Right

Have you ever wondered if a skateboarder trains?

Whether you’re familiar with the sport or not, you’re probably thinking “no”.

Yes, skating has changed over the years but the culture to this day remains the same.

However, over the last few years the idea that gyms are just for “dudes with muscles and mirrors” has changed within the skating world. The importance of strength and conditioning has grown, with many riders now starting to incorporate a program into their weekly routine.

While skateboarding keeps to the streets, professionals are still turning to other exercises to help improve their performance and help with injuries.

Whatever you want to call a skateboarder, there is no denying the ability of this sports’ athletes who continue to “wow” those who follow it.

Skateboarding has been an essential part of street culture for decades but has now grown into a global phenomenon. While some skaters maintain the laid-back, street image it was born from, many are drawn to the sport because of the opportunities and success it can bring with its new mainstream cultural following.

Hailing from the streets, skateboarders were self-made, self-taught and experimented on public spaces. Riding a skateboard use to be associated with danger and carelessness and was marginalised negatively in the media.

But since its inception in the 1960s, skateboarding has blossomed into a respectable sport. From empty pool bowls and illegal rides to a multibillion-dollar industry, skateboarding has taken over and its success was rewarded this year by being included into the Olympic Games.

As we see skateboarding make history, it’s not only the sporting world that has seen the effects.

The rise of skate pop culture

There are few examples around the world that have had more of an influence within pop culture than skateboarding. It has had a significant impact on music, fashion and television – plus it has changed how generations should look, feel and communicate.

Over time, skateboard culture became more dominant, bringing people who skate and those who don’t together. And although to some, skateboarding is just considered an activity to do when you’re bored, skating culture is so much more than that with its iconic history and impact on larger society.

Having now permeated the world of music, clothing, video games, film, and most other forms of mainstream media, whether you enjoy skating or not, your lifestyle is almost certain to have been influenced by the unlikely band of original outcasts.

From screaming lyrics to a Blink-182 song on the radio, wearing vans with high cut socks, or watching MTV’s ‘Jackass’, you’ve lived it at some point of your life – and that’s gnarly dude.

Skateboarding is officially a sport

A lot of people would argue that skateboarders aren’t athletes because most of their training involves “playing” around with tricks in the park – which isn’t true.

Our bodies were never designed to ride a board, not to mention to ride on concrete. Skateboarding puts massive stress a on joints, tendons and ligaments. Not only is skateboarding an extreme physical activity, it requires immense skill, endurance, power and not to mention, guts.

In the rider world, strength training probably doesn’t have the “coolest” image. But as we see the sport of skateboarding enter the Olympic Games this year, emphasis has been put on riders being at their very best – both physically and mentally.

Strength training has a long list of benefits, no matter who you are or what sport you’re involved in.

It might not seem like the gym and skateboarding are a perfect match, but the sport requires a lot of strength, power and conditioning. Jumping, pushing, balancing, landing – all are results of power and strength.

Have you ever wondered how a professional skateboarder trains?

Read what an expert has to say below. 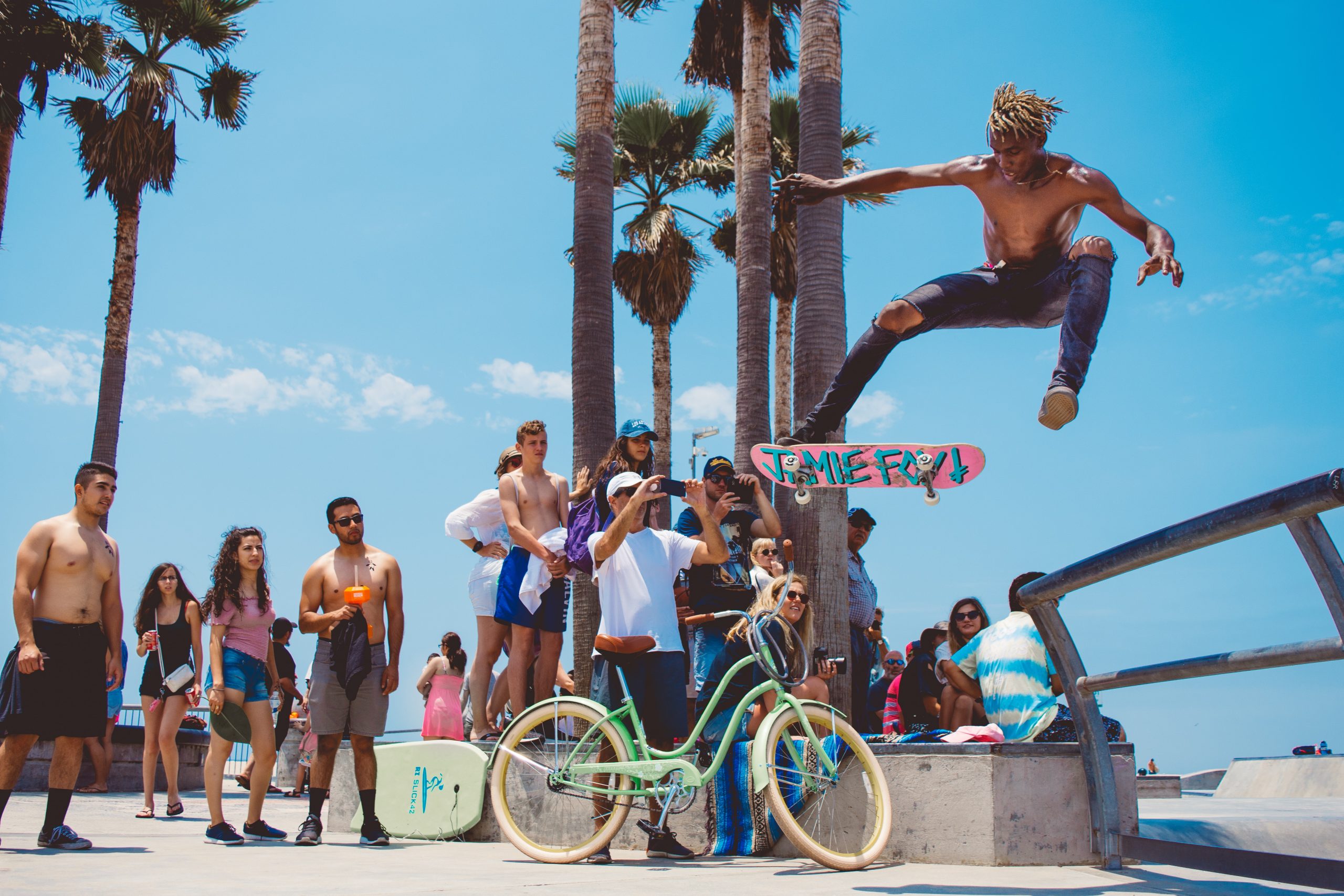 Hear from an expert:

Exercise Right had the pleasure to speak with Accredited Sports Scientist (Level 2), Paulo Barroso. Paulo is the founder of Solid Sports and has been working for 25 years in the health and sports environment, experienced in Sports Coaching, Sports Science and Exercise Physiology.

His impressive career has seen him work with high-performance swimmers, plus teams and individuals in a variety of other sports including skateboarding, fighting, motorcycle racing, triathlon, hockey, surfing, and sailing among others.

Paulo gives us an insight into how a skateboarder trains and prepares for tournaments.

Is training part of skateboard culture?

The culture and history of skateboarding does not involve much training other than practicing the skills while riding, attempting and learning new tricks, and creating a perfect run. With this, most of the time, skateboarders are not only chasing competition, but ride for the fun and lifestyle that skateboarding can bring. They train according to the modality on the streets, skateparks, bowls, empty pools, mini-ramps or half pipes.

Most professional skateboarders are not too absorbed on competition and their focus is skateboarding as a lifestyle, filming tricks and lines for a skate part in a skateboarding movie, or chasing a perfect picture in the perfect spot. This activity is what moves the industry and attract sponsors, money and fame.

The competitions and circuits, however, do play a role in the world of skateboarding, as we see in the recent Olympic Games inclusion with the two different modalities, STREET and PARK (also known as bowl riding). The inclusion brought excitement and criticism from the skateboarding community. Some saw it as an excellent opportunity to demystify and promote the sport, and others thinking it could corrupt and ruin the skateboarding culture.

What does skateboarding involve?

It’s a very physical activity that requires skills development, strategy, endurance and power, not to mention commitment and resilience to land tricks and complete a run without mistakes and injuries. Most of the effort comes from the lower body, primarily legs, gluts, core, and lower back.

Due to the risk involved in skateboarding, injures are usual among the practitioners. Fractures, subluxations and even concussions are common when flying over the coping, grinding rails or landing tricks in huge gaps such as staircases.

Nowadays, skateboarders are getting more conscious of the importance of doing strength and conditioning training to get better muscular imbalances, injury prevention and rehabilitation, and improve performance.

There is a big part of conditioning such as strength and endurance developed on the top of the board, riding it for hours every day and doing different tricks.

How does a professional skateboarder train?

A skateboarder will ride most days of the week with some days off in-between to recover from a hard session.

Specific functional training has a significant impact on the muscular balance of a skateboarder. Bringing some skating elements to strength and conditioning such as plyometrics to improve the “pop” and body rotation and landing; body waits such as SL squats, Bulgarian lunges, calf raises would help strength development improve knee and ankles accessory muscles.

Some skateboarders prefer to improve flexibility and strength through Pilates and yoga.

Due to the high incidence of injuries, skateboarders tend to start to worry about the importance of strength and conditioning after a significant injury, where they have to follow a recovery plan.

What does a week in the life of a skateboarder look like?

It’s usually a program individually developed to attend needs of each one in any case scenario.

Here is an example of a program developed for a street skateboarder coming back from knee surgery:

Top tips for an amateur skateboarder looking to take their performance to the next level?

SPEAK WITH A PROFESSIONAL:

Want some additional help to improving your training and performance, your local accredited exercise professional can help.

They will be able to prescribe safe and effective exercises that are tailored to your specific needs. They will also help you to set realistic goals and stay motivated.