It’s really easy to be ignorant of our habits and misunderstandings; to adopt cultural norms as being synonymous with our own values, and then upon straying from such norms, internalize the image of flawed Self. It creates a feeling of separateness, and of not belonging. This is what I’d like to discuss today and intend to ease your heart of suffering.

Why do I endeavor to ease your suffering?

Because I speak and support those who I call people with purpose and sensitive dreamers. And when you clear your heart and your understanding, your true power and true service come through.

HAVE YOU EVER FELT LIKE THE WEIRDO IN YOUR FAMILY, COMMUNITY, OR JOB?

I’ve said it here on my podcast Lila, and I’ll continue to emphasize the fact that there are various ways to live your life. The idea that there exists a hierarchy consisting of two camps— what’s best and true and what’s left for “the special Olympics*”—is misguided.

*I respectfully use this analogy to demonstrate the root of a general cultural belief in the USA as shown by the presumption that the special Olympics is inferior and less valuable than the original Olympics.

What do we accept, tolerate, and mark as inferior because it doesn’t live up to the “original”?

It’s the belief that different is somehow inferior because while admirable, it’s insufficient. Because if you could be the other thing (e.g. attend the regular Olympics), you would.

And this voice is so loud that it almost brings forth shame at the mere thought of ignoring it. Of choosing another way. Of not believing what it says. It ignores the magic of who you are— not in comparison to but as is. It insufficiently addresses the complicated realities of life, which can leave us feeling vulnerable in the wake of not being able to live up to the dream.

And what dream is that, little one? Is it truly yours? 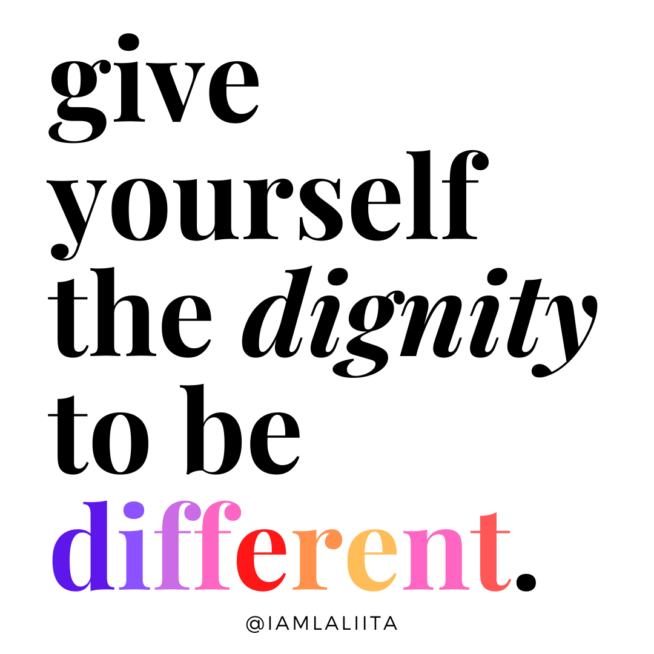 THE TRUTH IS THAT IN ABSOLUTE TERMS, THERE IS NO HIERARCHY.

It’s through our actions and our willingness to be who we are, different or not, that leads to true change. To a more compassionate society that is accepting of others.

The reason I point out diverse cultures around the world, like in Lila episode #13 here, is to demonstrate the possibility of all that could be. Aren’t cultures amazing in their never-ending creativity to make sense of their surroundings? To give meaning and richness to life?

Global cultures demonstrate there is more than one way to live your life. That other creative leaders and beings have built practices that over centuries have served them well. And you may benefit from adopting some of those habits and cultures.

FOLLOW YOUR OWN LEAD. MUCH OF SOCIETY IS DEEPLY DYSFUNCTIONAL.

Look no further than social media to deeply understand this, where deeply ingrained and often unconscious biases are plastered and sold all over the internet. Without presence, without wisdom, and the ability to quiet the noise of “should” and tune into the voice of IS, you’re destined for crazy-town.

And sensitive dreamers, people with purpose, require a sense of meaning, purpose, and belonging. But to force yourself to live up to standards and dwell in camps—or rooms as I frequently call them—that do not align with your light is challenging. There are other ways, and this requires you to believe. In yourself, in those that love you enough to support your freedom to follow a new path and in the dreams that show you the way.

MY GOAL IN THIS ESSAY IS THAT YOU ALLOW YOURSELF THE DIGNITY TO BE DIFFERENT.

To see the beauty in what’s on offer from all different types of people. And that you engage yourself enough, commune enough, to build real friendships with the people and values, the way of beings, you prize the most. Especially if they aren’t the ones you grew up with.

Aligning with your truest values is a greater representation of who you truly are, more than any singular race, gender, sex, nationality or any other checkbox you can imagine. The intersections of our lightest and most powerful gifts are one way of defining who we are as a society.

We fixate on fixing boxes when we should be fixin’ to build wings to soar. And speaking with and understanding the 1 million types of birds in the sky from all over the world to best learn to navigate the airways.

This brokenness first, and always, begins with a disconnect from Self.

That aligns with all those around you.

You need not be the same or different to belong or be accepted. I see you and I value you. And I’d love to see more of you if you’re willing.

Question values that are superimposed on the walls of the halls you roam. Whether it’s in self-help, coaching, the USA, brown-black-white-red-blue… be curious to it all so you can be free to see and be who you truly are. Beneath the noise. Beneath the misconduct of self which almost always relies on confusion.

Lalita Ballesteros is a speaker, comedian, director, and the founder of Haus of Lala, a creative agency specializing in personal branding. She stands by the belief that your voice matters and that authentic self-expression is our most important work. In the past, Lalita’s disrupted the publishing industry with Seth Godin and The Domino Project (powered by Amazon) creating six best-sellers and raising over a quarter million in revenue in only four months. She also worked at the American Embassy in Rome, created a 6-figure Airbnb business, and oversaw ambassador efforts at Lyft. She speaks three languages and is a regular contributor for Positively Positive, a publication with over 2.5 million followers on Facebook. Lalita’s been seen on the stages of TEDx and Comedy Bary as well as in the pages of Fast Company, Etsy, Forbes, Yahoo Small Business, Mashable, and the best-selling book End Malaria. She currently lives in Toronto with her dog, Luna. Follow her writings and comedy here and #100daysofcomedy here.