Last week I went to Utah to run an unusual marathon. My time was well over two hours slower than any marathon I’ve done, but that was by design—I was running with someone who was doing a series of extreme events back-to-back, every day for 100 days in a row.

The pace, therefore, was slow.

His name is James Lawrence, more popularly known as the Iron Cowboy. I’d heard of James a year or two ago after watching a documentary of his previous quest where he attempted (and completed, with a few small variations along the way) 50 Ironman-distance triathlons in 50 states in 50 days.

For his new quest, he’s attempting 100 “full-distance triathlons” in 100 days, all from his home base in Utah. (He can’t call them Ironman-distance because the Ironman brand is, shall we say, a little touchy about such things.)

If it sounds like this is easier than dealing with the logistics of travel, that part is probably true, but consider what’s involved:

Did you catch that last part? There’s no margin for error. If he gets behind in any event, the times stack up—and this has happened more than once already, where he finishes the run close to midnight, then gets in the pool again at 5:30am. All day long, no days off.

You can probably tell I’m impressed, and I don’t even bike or swim (at least not well). All I do is run!

Is He Doing This to Raise Money for Something? Yes, But…

But wait, why is he doing it? Here’s where it gets interesting.

Not surprisingly, James is raising money for a charity. In this case, it’s an organization that works to end human trafficking. So far he’s raised well over $100,000 and will presumably end up with a significantly higher number before it’s over.

But is raising money the reason he’s putting himself under such extreme pressure every day? As someone who studied these things and wrote a book about it, I’m pretty sure that’s not it.

Don’t get me wrong—I’m not saying that James is being deceptive in any way. It’s great that he’s able to align his efforts with a cause. I just mean that this motivation, however noble, is secondary. And not only is it a secondary motivation, but the benefits of a project like this (for both James and many other people) go far beyond fundraising.

On his previous quest, James also raised money for charity. He ended up with a good amount of money donated—but someone as determined as James could probably find a way to fundraise even more without 14 hours of endurance exercise every day. So, like any good quest, it’s not efficient or optimal.

This is a key component of quests: they don’t necessarily make logical sense. Plenty of outsiders “don’t get it.”

That’s why I believe the true motivation for a quest like 100 Ironman-distance triathlons in 100 days is much simpler. When I wrote The Happiness of Pursuit (a book all about finding purpose and meaning through a quest) I discovered that almost everyone who undertakes a bold adventure has difficulty explaining why they’re doing it.

To the hero on his/her/their journey, it’s intuitive: they simply have to do it. Once they get it in their heads, there’s no turning back. If they don’t make the attempt, they’ll regret it.

For some, however, that answer feels insufficient. Society at large tends to be uncomfortable with ambitious individuals—so the hero on the journey feels like they have to tack on some sort of justification.

Hero: “I’m going to ride a unicycle to the moon, all without sleeping.”

Person who lives a boring life: “That sounds crazy, why?”

Hero: “Because I’m raising money for kids with cancer.”

Person who lives a boring life: “Oh, that makes perfect sense. Let’s get you on the Today show.”

Speaking of The Happiness of Pursuit, one of the stories I liked best in the book was about Nate Damm, a young guy from Maine who walked across America. Unlike many of my other case studies, Nate had no pretense about any secondary motivations. “I’m doing this for myself,” he said.

The interesting thing is that even though Nate walked across America “for himself,” with no other justification, he ended up creating all sort of positive change as a result. (Clearly I was inspired! And countless other people were, too.)

Why, then, does a person like the “Iron Cowboy” feel the need to package a heroic achievement through charitable fundraising? Again, it’s not his fault—it’s because that’s what everyone expects. It’s unusual to say, “I’m doing this thing because it’s really hard and I want to challenge myself.”

But he should! Or at least, he could, and his quest would have no less value. And if you are thinking about doing some Really Hard Thing, know that you don’t need to justify or rationalize it somehow. It doesn’t need to be dressed up for anything other than the remarkable achievement it is on its own.

If you’ve read this far, you might think I’m criticizing James or belittling his goal in some way. Nope! I’m a fan.

After all, I got up at 4:30am and traveled to Utah just for the sake of being part of the event that day. I didn’t talk with James much during the run—I figured that every day he has people bothering him, and for me the value was in being a small part of a history-making achievement.

Even though I left James alone, I talked with many of the other people who showed up that day. It was Day 47, AKA the 47th day in a row that he’d been out there, and four days later he’d break his own world record for the most consecutive full-distance triathlons.

A few people in the group were ultrarunners, most were at my level (not an ultrarunner, but otherwise comfortable with running a lot), and at least four of them had never done a marathon before.

Those people—the ones who were inspired to attempt something they’d never done before—were the ones I was interested in. 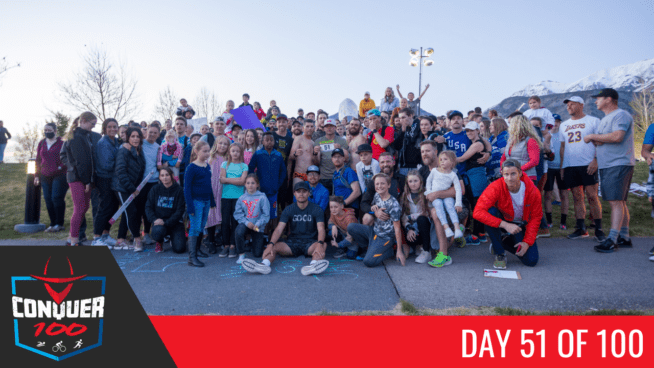 The crowd for the day James broke his previous record. I was there four days earlier for Day #47.

These are just a few anecdotes from the group I ran with in person on a single day of this herculean endeavor. Every day for 100 days, people from near and far are joining in to be part of the events. They’ll all go away with the story of a shared experience: I was part of that. For some of them, it might just be a nice memory. For others, it could be life-changing.

And of course, every day, tens of thousands are following online. Assuming that James is able to make it to day 100 (or, honestly, even if a serious injury forces him to stop sometime before then), countless numbers of people will be inspired and challenged. What do you think the impact of that is?

It’s impossible to quantify, but whatever is it, it has to be much, much greater than whatever amount of money he raises. The charity work is fine. But doing hard things just for the sake of doing them might be even better.

Here’s what’s really inspiring about a quest like the Iron Cowboy’s. It’s not the outcome—the money raised, the miles ran (and swam and biked, in his case)—it’s the pursuit. This is beautiful, meaningful, and entirely worthwhile by itself.