I regret the most not spending more time with my children and thinking that killing myself would be a better option for them.

I was depressed. I was afraid I had let them down even before they were two years old.

I regret the girl I left because I thought I was going to go broke and she wouldn’t like me.

I regret thinking I was smart and starting or investing in businesses that I knew nothing about.

What do I do now? Smashing a coconut in the street because someone told me it would create good luck.

Yes. I regret that.

Sometimes I even regret writing or saying things that I didn’t realize would hurt some people close to me. I’m sorry.

But I said it and I believed it and you can’t put toothpaste back into the tube.

No war can be justified, college is a scam, home ownership is vile, voting is useless, jobs suck, my dad had horrific relationships as a kid that I was afraid I was doomed to repeat – are among a few of the issues that resulted in death threats or lost friends and lost family.

A lion doesn’t give it’s prey a chance to explain before it eats the prey.

But show me a regret and I will also show you something to be grateful for.

We only grow by solving difficult gratitude problems. Literally: our brains neurons connect in new ways that save our lives later.

We regret because we didn’t question enough.

The present is unstoppable, devouring the future like the sunrise devours the darkness.

Success is moving from a present that fears to a future that acts.

Here’s 20 Ways I personally deal with my regrets. Maybe they will work for you. I don’t know.

Never believe someone who has the answers. I only know what works for me. This. 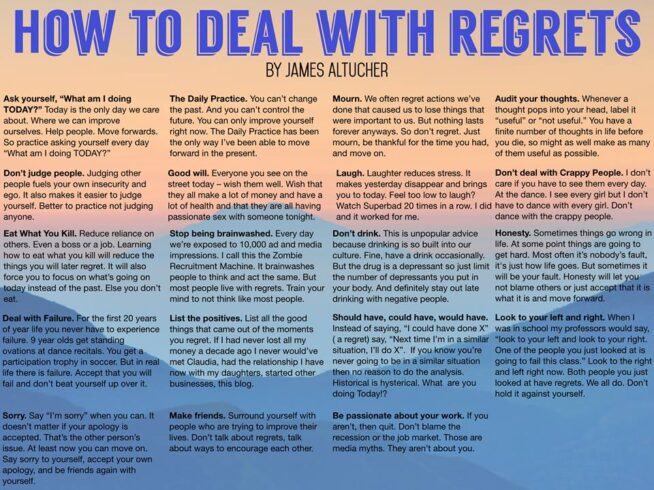